Set in a local pub, Jim Cartwright’s timeless comedy Two features a landlord, landlady, and their colourful regulars - with all 14 characters played by Frankton actor couple Blaise and Sarah Barham.

Described as ‘sharp, witty and quickfire’ by the Guardian, Two is touring halls, hotels and bars around the Southern Lakes & Central Otago in November.

Each character has a story to tell, sometimes humorous, sometimes poignant, always human. They include the bantering, bickering publican and his wife; the womaniser and his long-suffering girlfriend; two elderly pensioners, one who wishes her husband was dead and the other wishing his wife was alive. We also meet the 'other woman', hiding behind her sunglasses, trying to drum up courage to confront her married lover; an eccentric couple who come to the pub to eat crisps; and a lady who reveals her secret lust for 'big men'!

“And taking some of the shows to real bars and hotels will be fun for the audience – especially if we get thirsty!” John says.

Two is Sahara BreeZe’s second play to be toured around this district, following the acclaimed production of Dear Lupin in 2019.

Local audiences may recognise ‘award-winning’ actors Blaise and Sarah from their performances with Queenstown’s Remarkable Theatre, including most recently Cosi and One Man, Two Guvnors. 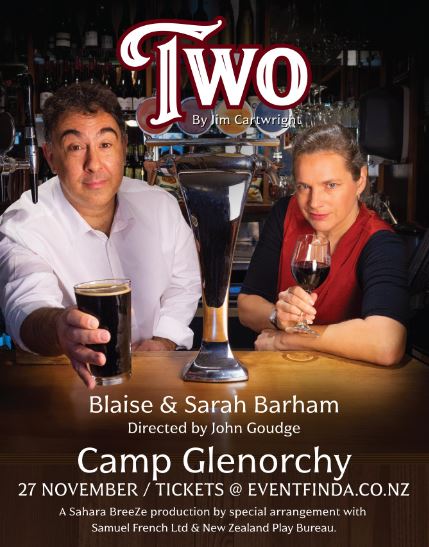 “There are laughter and tears along the way in this emotional rollercoaster” – Manchester Evening News.